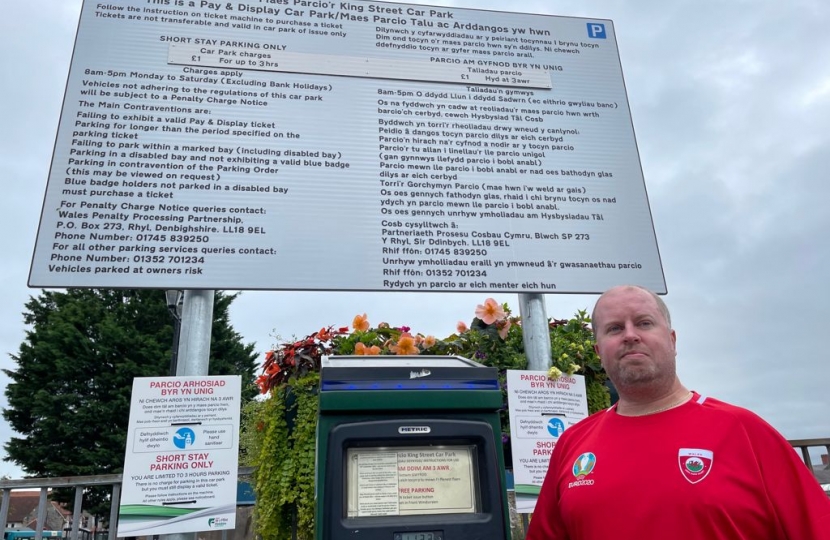 Car parking charges were originally suspended by the Council at the start of the pandemic in order to assist key workers and encourage footfall for businesses operating in town centres. However, the council have decided to re-introduce these charges next week citing “reducing congestion in town centres” as one of the main reasonings behind their decision.

The Delyn MP feels that re-introducing off-street parking charges has the potential to deter shoppers from town centres as they either don’t want to pay the charge or simply cannot afford to do so.

Rob has written to Katie Wilby, Chief Officer for Streetscene and Transportation and Councillor Glyn Banks, Cabinet Member for Streetscene at Flintshire County Council, asking them to reconsider this decision and making a number of compromises for them to consider. This included re-introducing charges on a part-time basis, for example only at peak times such as on market days, where footfall in town centres is greatly increased regardless of parking options.  Alternatively, increasing public transport in and around town centres would address the issue of congestion and also encourage shoppers into the High Street. This is supported by data from Rob’s transport survey where the majority of respondents called for ‘more frequent buses’ to improve local transport connections.

“I understand that one of the main reasons behind reintroducing parking charges, was to ease potential congestion.  I’d be interested to see the evidence that shows that the current fee-free parking has led to any congestion problems in the county.

A more appropriate resolution to easing congestion may be to instead improve public transport links to and from our towns.

This would solve the issue of too many cars and at the same time ensure local people still can visit their local town centres, helping the businesses that rely on footfall.

I want our local high streets to be supported as much as possible, so I hope that the Council consider all alternative proposals.

I am calling on Flintshire County Council to reconsider their decision to re-introduce car parking charges from 1 October 2021.