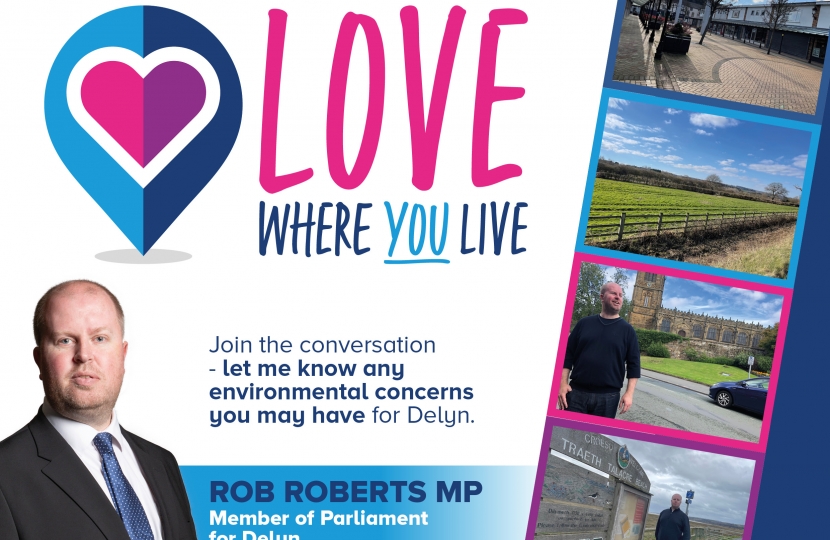 Rob Roberts MP has launched a new Love Where You Live Campaign so that everyone, no matter where they live, can have access to high-quality facilities, town centres and local green spaces as they are vital for our health, safety and the wellbeing of everyone in our communities.

Over the last number of years there has been a growing focus on looking after our local communities and the local environment so that both ourselves and future generations can benefit from and appreciate them.

Rob has launched this campaign to provide support to the local community, whether that be through supporting independent businesses who form the backbone of our high streets or through preventing littering and fly-tipping. Our communities deserve to be cared for and treated with respect so that everyone can love the area in which they live.

Sadly, littering costs the taxpayer hundreds of millions of pounds each year, and if this problem was resolved, then this funding could instead be spent in our communities on areas that vitally need additional investment and support.

As part of his campaign and in direct response to this issue, Rob has launched a ‘Fly-tipping and Littering Survey’ so that residents can easily report any issues they may be experiencing with fly-tipping or littering.

By launching the Love Where You Live campaign, Rob aims to reduce levels of littering and fly-tipping by working with stakeholders to discourage this behaviour,  while at the same time ensuring that when incidents do occur, they are dealt with quickly and efficiently.

“Since being elected countless constituents have contacted me regarding reports of continuous fly-tipping and littering in some of the constituency's most beautiful areas.

These incidents not only harm our local environment and wildlife, but also have the potential to discourage inward investment and tourism to our region.

I am therefore committed to working with Flintshire County Council, the Welsh Government and the UK Government to ensure that our local areas are protected and that littering is discouraged so that our environment and local communities can properly be looked after and appreciated.

Rob’s Fly-tipping and Littering Survey can be found here https://www.rjroberts.co.uk/form/litter-fly-tipping-survey

More details of Rob’s campaign can be found here https://www.rjroberts.co.uk/campaigns/love-where-you-live

Love Where You Live