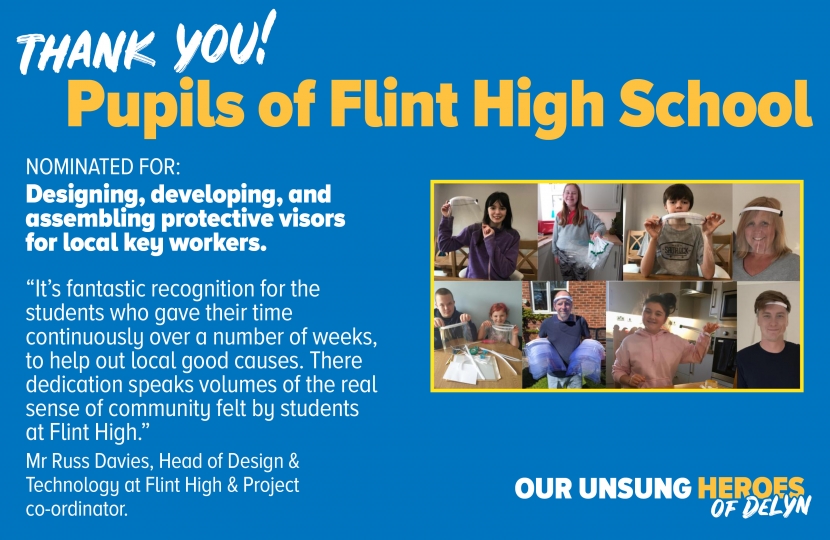 I launched my community focussed, Unsung Heroes campaign earlier this year to seek out and highlight those people in our community that have gone above and beyond to support others during this unprecedented pandemic.

Many constituents have taken the time to nominate somebody in their community who they believe deserves recognition.  Nominations included reasons such as making much needed PPE for front line essential workers, raising community spirits through online initiatives, food parcel deliveries, and re-focussing a business to help the community.

I have already announced a number of inspirational winners and details of these can be found at https://www.rjroberts.co.uk/2020-winners-unsung-hero-award

I am proud to announce the next winner nominee selected as an Unsung Hero of Delyn.

When schools were closed due to COVID-19 the students were all sent home.  Upon following media reports of shortages of PPE the staff and students were concerned and they realised there was something they could do.  Mr Russ Davies, Head of D&T at Flint High co-ordinated a project to design and print protective visors for local key workers.

Once the parts had been printed in 3D he packed them up and delivered them to students homes where they would assemble them ready for Mr Davies to collect them and deliver to local organisations.

Over 1,000 visors were delivered.  Maes Hyfryd and Stepping Stones, a local charity were amongst those who received masks made by the school.

When I spoke to Mr Davies he had this to say about the students of the school:

“This is fantastic recognition for the students of Flint High who gave their time continuously over a number of weeks, to help out local good causes.

“Young people are often given a bad reputation, but I truly believe their commitment and effort on this project speaks volumes about the real sense of community felt by the students in the school.  I couldn’t be prouder of them.”

A personal letter of thanks, along with a certificate of recognition has been sent to Mr Davies to share with the young people and they will receive an invite to a celebratory event hosted by me once lockdown is ended and social gatherings can take place.