Rob shows support for farmers and local produce in Delyn 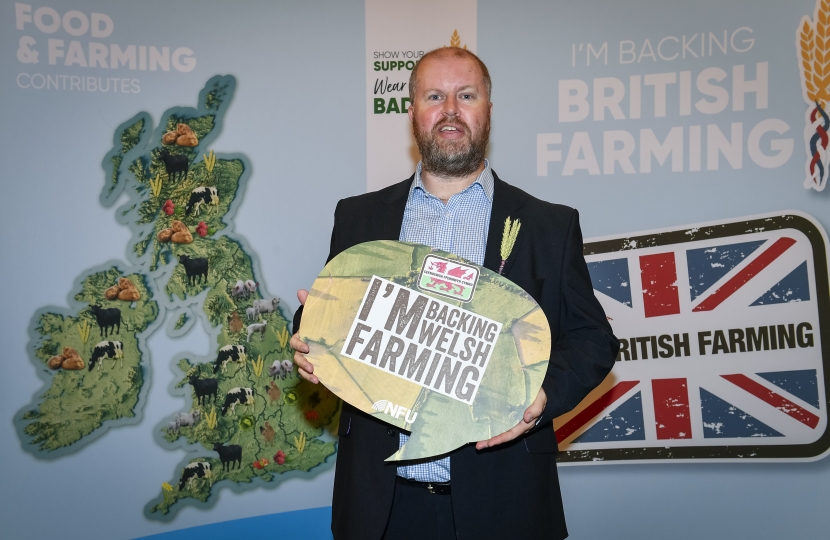 On Wednesday (15th), Rob Roberts MP showed his support for British and Welsh food and farming by promoting Back British Farming Day, which recognises the crucial role farmers in Delyn play in producing food for the nation.

The National Farmers’ Union (NFU) provided MPs with the emblem of the day - a wool and wheatsheaf pin badge – to enable them to join the celebration of British agriculture. Food and farming is a key business sector, worth more than £120 billion to the national economy and providing jobs for almost four million people.

In Delyn, over 75% of land is used for farming and agriculture purposes so it a major part of many local communities. Having visited and spoken to many local farmers, including most recently the team at Mynydd Mostyn Dairy, Rob is well aware of the challenges they are facing and is committed to doing all he can to support them.

The NFU also launched a new report which asks for Government to complete a comprehensive report on UK food security later this year, covering the country’s production of key foods and its contribution to global food security. This would be the first meaningful assessment of UK food security in over a decade and the first under the requirements of the Agriculture Act that mandate reporting every three years.

“While I am a long-standing supporter of the faming community, Back British Farming Day presents a great opportunity to give my particular thanks to the local farmers who feed us, as well as take care of our countryside, especially during the pandemic.

“I fully support the Back British Farming campaign which is asking us all to value British and Welsh food. I would encourage my constituents to show their love for our homegrown food and farming sector through simple actions like buying local produce and enjoying the countryside responsibly.”

Rob hopes to continue to meet and support local businesses, including local farms, as part of his ‘Love Where You Live’ campaign, so please get in touch via rob.roberts.mp@parliament.uk if you would like to arrange a visit.