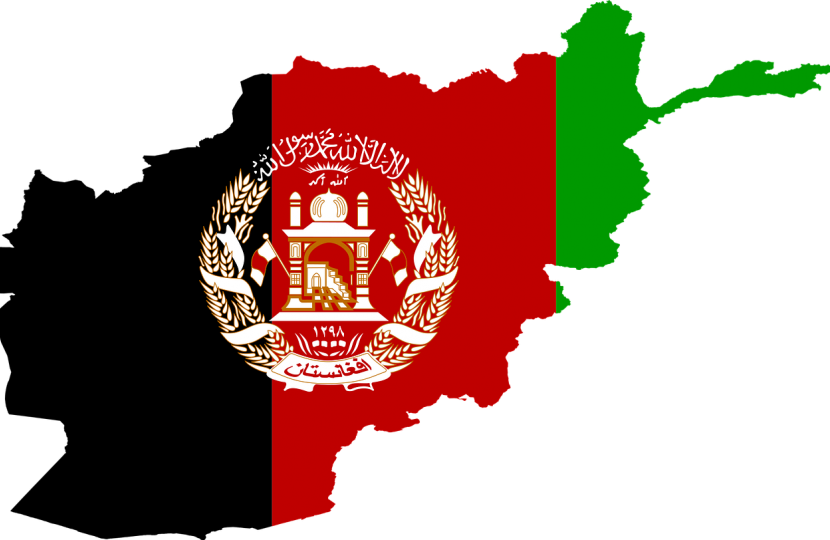 I was not long out of education and embarking on the early stages of a financial services career when Al-Qaeda (AQ) killed thousands of people in their terror attacks of 11th September 2001. Like most of you I can remember exactly where I was and will never forget staring at the TV in amazement as another plane hit and then later when the twin towers collapsed with total devastation in New York.

In Afghanistan, the Taliban had provided a safe haven for AQ terrorist training camps and completely refused to hand over Osama Bin Laden.

To remove the threat of terrorism, the UN Security Council passed Resolution 1386, unanimously, authorising NATO to deploy forces to the region.

Sadly, 454 British personnel died and many more were seriously injured as part of the UN mission. Most of us know someone who has been touched with the grief of having lost someone in this conflict.

The United Nations presence continued until 2014 when it changed to a much smaller mission the RSM (Resolute Support Mission) of troops aimed at providing training and support for local Afghan forces so that they would be better able to defend themselves and their country. Two more British personnel were killed in a crash during the RSM, back in 2014, but happily there have been very limited casualties since then for coalition forces. It is this RSM mission which President Biden decided to withdraw US support for earlier this year and the reason US Forces are now leaving. The reason seems  to be more to do with “we have been there long enough” rather than any sense that the job was done and that the Afghan Government would be in any position to defend itself moving forward. Clearly it wasn’t.

Like the rest of the World, I have watched as the Taliban swept through Afghanistan once again. We all saw and heard reports of images of women being erased from shop fronts. We have seen bodies lying in the streets. We have heard assurances from the Taliban regarding protecting women and assuring education continues for girls but have also heard of women being denied education, taken from their jobs and of 12 year olds being taken as sex slaves or married off to Taliban fighters. Yesterday we saw a female CNN reporter have to change from her usual colourful outfit and flowing hair to traditional Islamic dress as to do otherwise would have put her in mortal danger.

The UK Government has been very clear that only the UK and Turkey were willing to retain a presence in the country after America decided to withdraw. It was impossible for British and Turkish forces to provide the same presence as the multi-national force so we were forced to withdraw also, or the safety of our forces would have been in significant jeopardy.

We cannot act unilaterally or even bi-laterally with one ally. If we are not a multinational force we will not only be dangerously stretched but also lack credibility with the people of Afghanistan. I share the frustration of many of my constituents who have been in touch about the situation as well as people across our country and the world, that our allies didn't want to continue the training and support mission.

Given the unwillingness of international partners to act, the focus now is rightly on protecting those who have worked with us in Afghanistan and evacuating our personnel quickly and I am assured that every effort is being made to ensure the safety of as many people as possible. It is a rapidly-evolving situation which is extremely difficult to manage, but our forces personnel are among the best in the world and I know will do all they can to bring people to safety.

My heart - and I’m sure that of many of my constituents judging by my inbox - goes out to the young women and girls and the millions of freedom loving people in Afghanistan, many of whom were too young to have lived through the previous regime, who will now be ruled by the Taliban’s destructive and brutal regime.

I will press our Government to do everything it can to bring all British Citizens and those who have helped us over the last two decades to the UK as quickly as possible.

Over the coming days, I know that the UK Government is bringing forward details of a new resettlement scheme for Afghan refugees which will be aimed at assisting the most in need - including women and girls - to come to the UK and find solace in our welcoming, generous and above all safe society. I look forward to seeing the details and questioning the Government on the implementation to ensure that nobody is left behind.  I will be writing to Flintshire County Council understand what their plans are to support the Afghan Relocation and Assistance Policy and what impact this will have on their already stretched resources.

On the whole however, I am deeply saddened by the position taken by some of our most long-standing allies who by their unwillingness to stay the course have put the people of Afghanistan, the wider region, and indeed the rest of the world in jeopardy by allowing this murderous group to take control once again.