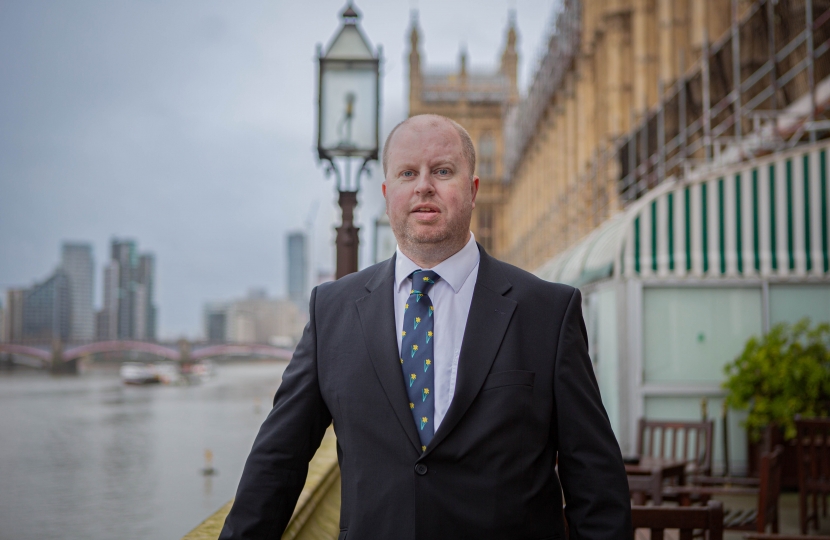 Rob is the Member of Parliament for the constituency of Delyn following the December 2019 General Election.  Rob unseated a long standing Labour MP after 27 years with a majority of 865.

Rob grew up in the family home in Northop Hall, he attended Ysgol Maes Garmon and became a fluent Welsh speaker.  Prior to being elected Rob was a financial planner and worked in financial services for 16 years, he has worked for large national firms and had his own business in the constituency until merging with a firm just over the border.  He was also a Governor at two local schools for 11 years.

He has always had a keen eye on politics, and volunteered during other Parliamentary campaigns in Delyn.  Rob was a former Deputy Chairman Political for the Delyn Conservative Association.  He was selected as the Parliamentary Candidate by the Association in September 2019.

Since being elected in December 2019, Rob has become a member of the Welsh Affairs Select Committee. Previously in this Parliament, Rob served on the Procedure Committee. Rob is active is several APPGs (All-Party Parliamentary Groups) including Fuel Poverty & Energy Efficiency, Mersey Dee North Wales and Skills & Employment.

Rob is a local guy who is proud to represent the constituents of Delyn.  He is passionate about improving our communities as well as helping and empowering others to improve their own lives.  The main reason for Rob being a Conservative is indeed based on that concept of empowerment.  He is a passionate believer in the government providing the framework and opportunities for people to be able to make their own choices in life, enabling everyone to have the ability to reach their potential and go as far as their ambitions will take them whilst ensuring that those who are in the most need of assistance are properly supported by the state.

Outside of politics Rob enjoys cricket and hockey and has played and officiated both to a high level over many years.  In addition, Rob enjoys reading, technology and travelling.  He has a teenage daughter.

Rob's priorities for Delyn are:

Getting vital funding for our schools

Rob will lobby the Welsh Labour Government to ensure that the extra funding provided by the UK Government reaches the front line.

Making our NHS work for all

Rob will press for this to be spent on vital front line health services in North Wales.

Rob will work with the UK Government to ensure that local business see the benefits of funding to create jobs and prosperity across our area.

Rob will campaign for increased investment in the transport links and infrastructure so that journeys are easier and more convenient.

Rob will campaign for a fairer settlement for Flintshire.