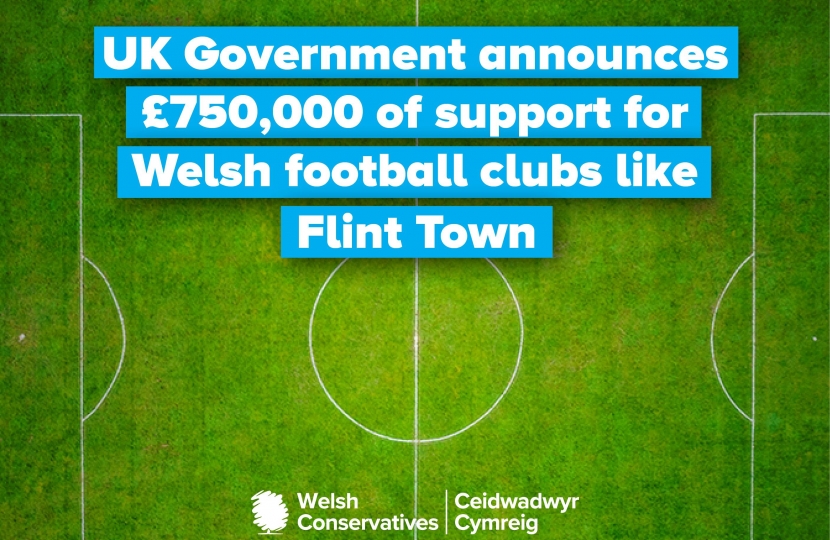 Member of Parliament for Delyn, Rob Roberts, has welcomed the news of new financial support for Welsh football clubs, including Flint Town United FC, as they struggle to stay financially afloat amid current Covid-19 restrictions.

The announcement from the Football Association of Wales (FAW) will mean that all 44 Cymru League Clubs will benefit from financial support as part of a unique partnership with The National Lottery.

The financial package – established by the FAW and The National Lottery and facilitated by the UK Government – will see clubs in the JD Cymru Premier, JD Cymru North and the JD Cymru South receive funding while matches continue to be played behind closed doors, owing to the current COVID-19 restrictions.

Football clubs and training facilities across the Cymru Leagues are often at the heart of their communities. They act as central hubs that give further opportunities for children and adults to be active, while bringing a source of pride to their towns. This funding stream recognises the essential role that Cymru Leagues clubs play beyond matchday.

National Lottery players, who make a difference every time they buy a lottery ticket, will also get a range of benefits as a thank you for their support – including free tickets to football matches, once stadia are safe to reopen, and VIP experiences with the Cymru National Team.

The funds, which will be distributed via the FAW, will play a key role in ensuring that the clubs can continue to exist, and, where possible, operate during these difficult times.

Commenting on the announcement, Rob said:

“I am glad to see that the UK Government has stepped up and shown its support for grass-roots sports like football by helping to facilitate this new funding package for Welsh clubs.

“Having recently met with the Chairman of Flint Town FC and heard about their financial difficulties following the loss of revenue provided by fans, I know this financial support will be hugely helpful to the upkeep and survival of the club.

“Local clubs like Flint are the focal point of our communities and is it important that we do all we can to support them in these difficult times.”

Jonathan Ford, CEO of the Football Association of Wales, said:

“At the FAW, we are incredibly grateful for our unique partnership with The National Lottery and the funding stream which has been provided for our clubs across the Cymru Leagues, while matches continue to be played behind closed doors.”

“Clubs in the Cymru Leagues play a huge role in their local communities and, like many others, they have been struggling in the current climate.”

“I’m delighted that the UK Government could help bring The National Lottery and the football authorities together to deliver for these clubs and for grassroots football in Wales. From Prestatyn to Taffs Well, this funding package will help enable clubs to keep going until fans can safely return.”

“The National Lottery and its players have been making a massive difference to communities across the UK for the past 26 years, so we’re thrilled to be able to partner with the Football Association of Wales to provide vital funding for these incredibly important clubs in the Cymru Leagues.

“As a huge football fan myself, I know what this will mean to fans of these community clubs, and I’m sure they’ll be pleased to hear that their clubs are getting the support they need."

The partnership follows a similar National Lottery initiative between the FA and National League in England, which was facilitated by the UK Government.  Work continues on partnerships with the Scottish and Northern Ireland FAs.

While this announcement of financial support from the FAW and The National Lottery, and show of support from the UK Government is welcomed, Rob is aware that more needs to be done to help secure the long term viability of local clubs like Flint. Following Rob’s visit to Flint Town FC in October, Rob has launched a new campaign calling for a partial return of fans to spectator sport like football - as for many clubs the revenue provided by fans is vital to their survival.

Building on today’s funding announcement, Rob is keen to see what more can be done to allow a safe return of fans to football grounds to ensure our football clubs are around for future generations to enjoy and support.